Research conducted on behalf of the Institute of the Motor Industry (IMI) shows that while 40% of the public have grave concerns about air pollution and see Ultra Low Emission Vehicles (ULEV) as a solution, they are unwilling or unable to pay the increased insurance premiums currently levied on these cars. As a result they won’t consider buying or leasing one in the near future.

Insurers charge up to 50%* more to cover electric and hybrid cars because of the higher purchase price and the lack of skilled technicians available to repair them.  At the current moment only 1% of mechanics in the UK have the necessary qualifications to carry out work on the high-voltage systems and they are almost exclusively employed within franchised dealers.

The public are similarly concerned with the lack of charging points available to service electric and hybrid cars, according to the IMI research. The government is supporting the development of the charging infrastructure with a £600m fund to promote clean cars, however, it continues to resist any intervention in the market to deal with the serious skills gap.

The IMI has called on Ministers to help with a £30 million investment in training from its £600 million fund created to promote emission free vehicles.

The IMI had positive dialogue with the Department for Transport on the skills issue in 2016, but since Chris Grayling MP took over as Secretary of State the talks have stalled.  The new Minister with the brief for the Modern Transport Bill, Environment and Technology, John Hayes MP, has so far been reluctant to engage in further discussions.

Vital Research and Statistics conducted the survey for the IMI.  They polled 2,000 UK adults with driving licenses between 13th and 19th December 2016.  Only 17% of respondents thought the extra costs for insurance for ULEVs were a price worth paying for the environmental benefits. Even though 38% ranked Air Pollution as the thing they worried about most.

There were age and regional variations in the responses. 18-24 year olds are more willing to pay higher insurance costs, 21% compared to the over 55s of whom only 9% would pay the extra cost.

More than 20% of residents of London, Birmingham, Edinburgh, Brighton and Cardiff believed the extra costs worth paying for cleaner air. Only 11% of residents of Coventry, Leeds, Southampton and Newcastle agreed.

"Members of the public are rightly concerned about air pollution, and many drivers clearly want to do their bit for the environment. But it’s up to the government to make sure the right incentives are there.

“The reality at the moment is that motorists are effectively penalised for choosing greener options. For that to change the government needs to step up and invest more in clean fuel vehicles, as well as the infrastructure and skills needed to support, service and maintain them.”

“Millions of tax payers cash that was spent on charging points will be wasted if the government won’t help independent garages and wider industry keep up with the switch to electric.

“It’s not rocket science. Small businesses are uncertain about future demand for work on electrified cars and won’t risk investing in the skills they need without help from the government. This means insurance and servicing costs will stay out of the reach of many drivers and car buyers will still be attracted to diesel cars as the most fuel efficient alternative, keeping them on our roads for a number of decades to come.

“The government has recognised the most obvious barrier to consumers buying electric cars, which is the charging infrastructure, and it is taking direct steps to address this.  However, it needs to recognise that this is the biggest change in the automotive industry for over 100 years and there are other barriers that must be addressed too, not least the skills gap.” 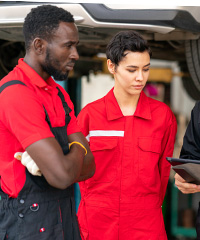